For this drawing I used Staedtler Ergosoft colouring pencils.

(Staedtler is my choice but there are many good brands).

1. I elected to use card rather than paper.

Why? I already knew I’d be layering and cross-hatching the colours, so I wanted to have confidence in the surface.

– I studied my ‘original’ on my pc screen and, judged the centre of the subject.

– Before drawing I laid a mount over the card to help me concentrate my work on the central area.

– I drew a vertical line down the centre and then five horizontal lines to help me judge the approximate top, bottom and, centre.

– Using a 4H graded pencil I worked quickly to sketch in the outline of the subject.

– I held the pencil near the top so I was using it like a paintbrush. This technique allows several outlines to be lightly drawn.

– Holding a pencil too close to the point tends to make the artist press harder, which is not desired in the early stages. 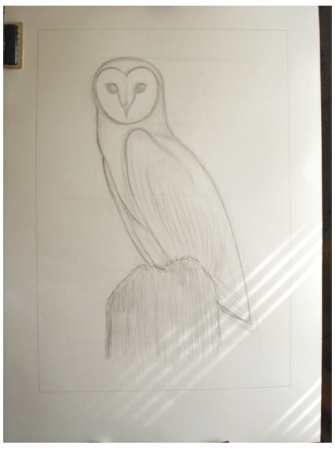 2. I moved up in grade from a very light 4H toa  HB (middle grade) pencil, but continued with my technique of holding the pencil near the top end.

– As I saw the general shape forming, I stopped every few minutes and stepped back from the easel.

– It’s tempting to continue and become engrossed in finalising the outline, but only by stepping back is an artist able to appreciate the overall setting and form.

– I continued to use the HB pencil in the latter stages of forming the definite shape and outline. There were many light outlines to choose from.

– I moved my fingers down closer to the pencil point to ensure I gained accuracy in which outlines I chose.

– At this point, there is still no use of an eraser. 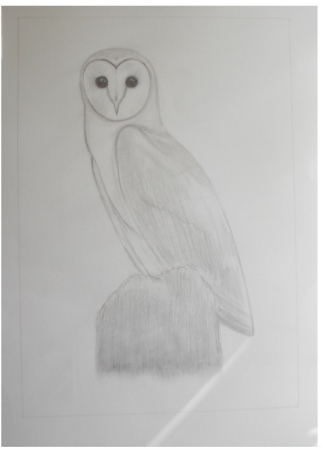 3. I continued with the HB pencil and, kept my hand nearer to the middle.

– I rapidly and lightly sketched in the small feathers on the head and neck.

– I sketched in the main groups of wing feathers and the direction of the grain on the wooden post.

– I kept an eye on areas which would be white or pale in the end product.

– Instead of using an eraser, it’s better to leave the white areas alone if possible.

– I darkened the eyes but only with the HBpencil. Not surprisingly the eyes are a focal point for the artist.

– I stepped back often to assess the general appearance.

– When it felt the internal structure was becoming more prominent, I lightly erased the darker outline, but I was careful to step back and assess regularly.

– I used the HB pencil to lightly show the areas of shade in the face and breast.

– I left face and, outer wing with a strong outline.

4. The first use of colour was an ochre(naples yellow).

– I held the pencil high, just as I would tocreate the lightest touch on the surface.

– I used the ochre in every area where there would be colour. It was important to continue avoiding the white areas.

– To concentrate on the bird, I avoided the temptation to create a base colour on the wooden post.

– When I was happy with the areas lightly coated in ochre, I then used yellow(primary), but sparingly.

– In some places, like the top edge of the wing, there would be a ‘golden’ and whiteeffect, so the yellow was used with more pressure to ensure it was pronounced.

– Most, but no all of the ochre areas were cross-hatched with yellow.

– I used a fingertip to ‘blend’ the ochre and yellow in patches.

– To finish this stage I selected a 2B (soft) pencil to darken the eyes and the ‘face’.

– I also used a few strokes of the 2B pencil to emphasise the wing feathers.

5. I used a fingertip to ‘blend’ the shadowed areas of the face.

– I used orange to create patches of deeper colour on the head and, neck.

– I continued with orange to create the same patches of depth on the forward edge, back edge and tip of the wing.

– I used a light touch to apply red (primary) to create small patches of deeper colour on the head, front edge of wing and on patches over the wing.

– I used strokes and shades of brown and, purple on the short back feathers.

6. To create balance I used a 2B (soft) pencil lightly to create more shade in the face and body.

– It was important to remember not to shade areas which would remain white.

– I used a fingertip to blend and tone the shaded areas of face and body.

– I drew faint lines close together to produce a feathered texture to the face.

– I applied an eye-shadow effect working out from the eyes, using pencil strokes.

– I used single pencil strokes from outer edge to centre to darken the eyes.

– I used a few light strokes of pink on the beak.

– I cleaned the edge of a soft eraser and ‘flicked’ it where I required highlighted feathers on the wing.

– Where I’d created the highlighted feathers, I emphasised with a few strokes of the 2B pencil. I darkened other areas of wing.

– I gave the wooden post a light coating of ochre. 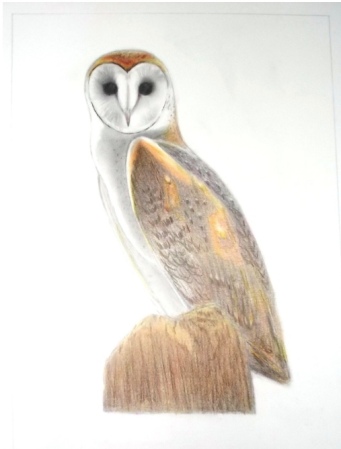 7. I coloured the wooden post with layers and, patches of ochre, yellow, orange, red and,brown.

– When I saw an overall balance of colour in the drawing I used the clean edge of the eraser to ‘highlight’ and ‘clean’ the areas of face, neck, breast and body where the fingertip shading had over-run.

– I used the eraser around the entire profile to ‘clean’ the few hairlines leftover from the initial layout.

8. The post required a range of tones to create depth, cracks and highlights.

– I used red to shade the edges which would require to be the darkest. I added ochre and brown over all but the brightest sections and, cross-hatched the brown over the red shaded areas to create more depth overall.

– I used a fingertip to blend areas of colour in the post and, darkened with the brown along the edges of darkest colour.

– Background colour was created by starting with yellow in diagonal shading from bottom left to top right.

– I cross-hatched the yellow with pale greenshading applied from bottom right to top left.

– I blended the two cross-hatched colours with fingertip in patches.

– To create the ‘ray’ effect I didn’t blend the darker colour. 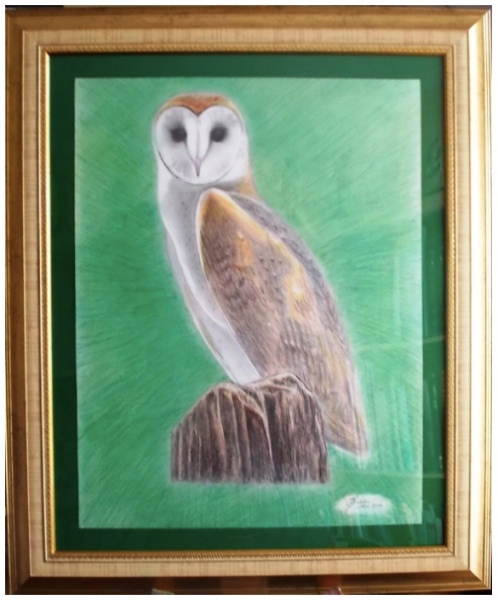